Under the watchful eye of Natalie, Prince had the great pleasure of animating the latest Bisexual Group. After a round table of presentations, Prince talked about the Kinsey, Red-Purple and Klein scales, thus charting a bunch of terms: hete 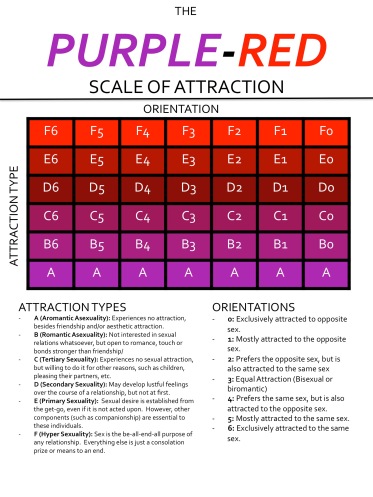 rosexual (straight), heterocurious, heteroflexible, pansexual, homoflexible, homocurious, homosexual (gay/lesbian). Prince mentioned the existence of romantic, sexual, behavioural and social factors in everyone’s orientation.
The Purple-Red scale brought yet another dimension that we inspected, and we went on with other dimensions such as gender identity and interest in kink, that we found had generally no correlation between each other.

Some participant wanted to come back to last month’s subject -when to consider coming out- with a particular case of office flirt, that the group enjoyed discussing about.

We ended the discussions with our opinions about the current state of the Montreal bisexual community, that we recognised as pretty inactive nowadays. Events are held at the Sky and the “bisexual” keyword does bring up events in Montreal on Meetup.com, but other than participating in the Pride Parade, the ALCC will focus its energy on its education mission with these groups.

See you next month!

See Mx_Prince on Fetlife
View all posts by Prince »